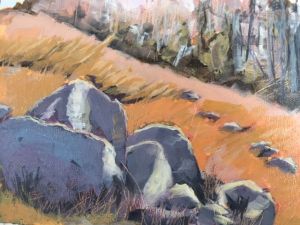 Since his first exhibit at the library in 2018 Shula has continued to paint plein air landscapes delving more deeply into effects of sunlight on the landscape throughout the four seasons.
He says of his approach to painting that, “I’m always looking for the balance between expressiveness through loose handling of technique, and faithfulness to the subject matter.” Some of his favorite local painting spots represented in this exhibit include, the Head of Tide Preserve, Frye Mountain Game Management Area, Belfast City Park, Kelley Cove in Bayside, and the yard around my house.

A former English Teacher at Searsport High School, Shula took up painting in earnest in 2015 upon retirement. Classes at Waterfall Arts and the Hutchinson center helped to hone his skills; he began painting still life’s and soon found inspiration in the landscape around him.

Prior to teaching, Jeff Shula worked for the Republican Journal and Waldo Independent. He recently published the book “Fireside Chats” featuring interviews from the Waldo Independent with Waldo County old-timers and the photographs of Peggy McKenna. Jeff lives in Belfast with wife, Kris.

The Barbara Kramer Gallery at the Belfast Free Library, located on the ground floor, was named in memory of Barbara Kramer who was an ardent supporter of the visual arts in the Midcoast area in the 1980s until her death in 1998. When the library was undergoing a significant expansion in the late 1990s, a group of area residents with the encouragement of the Library Board of Trustees raised funds to create this special exhibition space where art and or other materials relating to the history of the library or Belfast can be displayed.