While the Library remains closed we have begun to offer some virtual programs. See the calendar for listings. 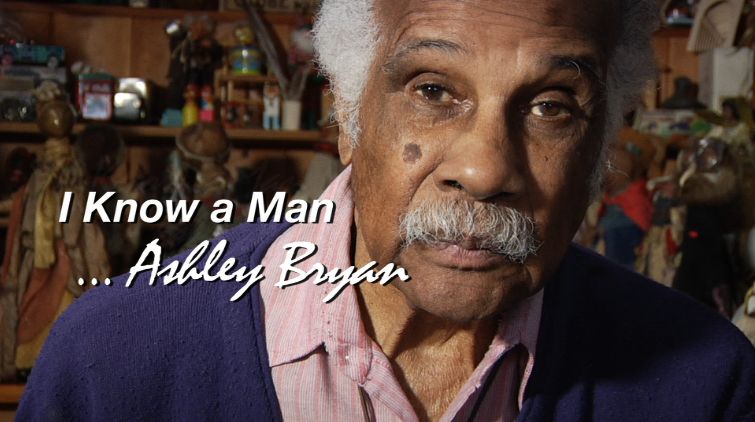 Filmmaker Richard Kane presents I Know a Man … Ashley Bryan. Join the Belfast Free Library for a film screening and a conversation with the director.

I Know a Man … Ashley Bryan is said by some to be an antidote to the hatred, racism and division that our country is experiencing.  The film is about this 95-year-old creative wonder who skips and jumps in his heart like a child.  Born in Harlem and raised in the Bronx, Ashley’s talent was nurtured by artist Romare Bearden.  Ashley was drafted out of Cooper Union into the segregated US army at age 19. He served in an all-Black battalion during World War II and preserved his humanity by drawing, stowing supplies in his gas mask. Ashley now lives on the remote Cranberry Islands, Maine, and has been using art his entire life to celebrate joy, mediate the darkness of war and racism, explore the mysteries of faith, and create loving community.  He is a poet/illustrator of over 50 published children’s books, and makes magical puppets and sea glass windows from found objects inspired by his African heritage. The film explores his world from the time his father “was given the mop and the broom”, (a reference to Gordon Parks photograph, American Gothic).  He quotes Marian Anderson admonishing “to keep another down you have to hold them down, and therefore cannot  … soar to the potential within you.”  He spreads beauty through his linocut prints exhorting “Let My People Go”. His life story and the art he makes from this wellspring of experience is an inspiration to people of all ages.

Richard is an independent film director whose work is focused on the intersection of art and contemporary American life. He is currently raising funds for his next film ROBERT SHETTERLY: An American Who Tells the Truth.  Previous film releases include, J. Fred Woell: An American Vision, I Know a Man … Ashley Bryan, Imber’s Left Hand, and 15 others, all part of the Maine Masters collection, a New England Emmy-nominated series of portraits that airs on public television. With partner Melody Lewis-Kane, their company, Kane-Lewis Productions, has worked for National Geographic, The Discovery Channel, the Kennedy Center for the Performing Arts and the White House Office of Technology Policy among many others. Kane-Lewis produced the Natural Resources Council of Maine’s 50th anniversary film Protecting the Nature of Maine, an indie doc ROCK SOLID: The Schoodic International Sculpture Symposium and the classic award-winning documentary M.C. Richards: The Fire Within.  From 2007-2016 Richard served as chair of the Maine Film & Video Association.