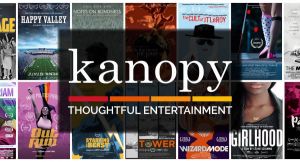 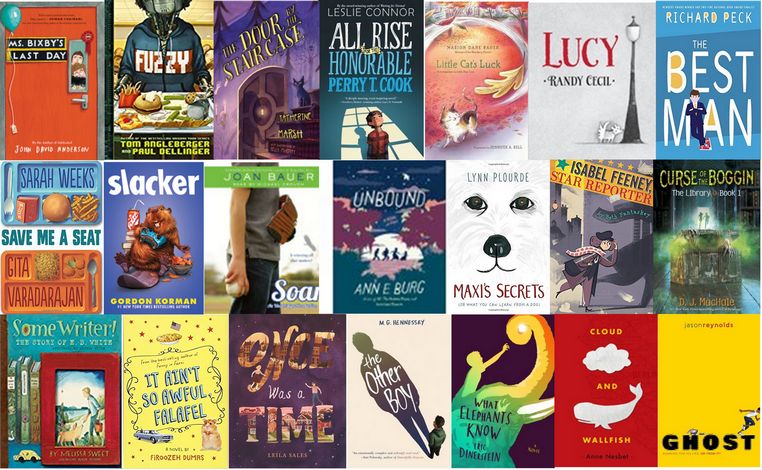 Angleberger, Tom and Dellinger, Paul. Fuzzy. Amulet Books. Science fiction. Gr. 4+. 263 pgs. Good read aloud. Imagine your school is studying artificial intelligence and you are assigned to help the new student, Fuzzy, (a robot!) navigate middle school. Seventh grader Maxine mentors Fuzzy but both wind up in trouble with Barbara, the supercomputer vice principal in this thought-provoking and entertaining read.

Bauer, Joan. Soar. Viking. Sports fiction. Gr. 4+. 296 pgs. Good read aloud. Jeremiah, who had a heart transplant at the age of 10, is determined to bring baseball back to the small Ohio town where he moves. He can’t play, but can this unforgettable character convince classmates to revive the local Muskrat team in spite of the recent scandal involving one of the town’s young players?

Bauer, Marion Dane. Little Cat’s Luck. Simon & Schuster. Poetic narrative. Gr. 4+. 211 pgs. Good read aloud. Patches leaves home, chasing after a wind-blown autumn leaf, until she is lost. She thinks she finds refuge in what turns out to be the doghouse of a mean and lonely dog, Gus. Readers will delight in this charming story, rich in description and suspense.

Burg, Ann E. Unbound: A Novel in Verse. Scholastic. Poetic narrative. Gr. 4+. 345 pgs. Good read aloud. Fiesty Grace, a 9-year-old in Virginia, is sent to the Big House from the slave cabins to work in the plantation kitchen. Her questioning attitude angers the Missus who is determined to teach Grace a lesson at an unbearable price. Based on historical research about the Great Dismal Swamp, this is a story of terror and love; inhumanity and resolve.

Cecil, Randy. Lucy. Candlewick. Realistic fiction. Gr. 4+. Unpaged. Good read aloud. The story of three lovable characters: Lucy, a stray dog looking for a home; Eleanor, a young girl with a tender heart and plenty of sausages; and Sam, her father, a store clerk aspiring to be a juggler but paralyzed by stage fright. The story, in four acts, is told in text and beautiful illustrations that demand a careful look. A delightful read/view for all ages.

Connor, Leslie. All Rise for the Honorable Perry T. Cook. HarperCollins. Realistic. Gr. 4+. 381 pgs. Good read aloud. Perry has been allowed to live in a room near his mom’s cell at a correctional facility in Nebraska for years. A new district attorney arrives and, angered by this breach of protocol, forces Perry into foster care, and delays his mom’s parole application. While Perry lives with the attorney on the “outside,” he researches his mom’s crime, preparing to plead her case. A story of hope and perseverance.

Dinerstein, Eric. What Elephants Know: A Novel. Disney Hyperion. Realistic fiction. Gr. 4+. 273 pgs. Good read aloud. In the jungles of Nepal (where the author has lived), Nandu is abandoned as a toddler and adopted by a one-armed stable manager and a female elephant! He plans to become a mahout (elephant trainer) for the king’s stable, until the government threatens to close the facility. At 12, Nandu is determined to save the stable. Details about Nepal’s culture and environs add depth to this fascinating read.

Dumas, Firoozeh. It Ain’t So Awful, Falafel. Houghton Mifflin Harcourt. Historical fiction. Gr. 4+. 378 pgs. It’s 1978 and Cindy (originally Zomorod in her native Iran) has just moved to California; then Iranians take American hostages and, instead of blending in, her family becomes the target of racism. This semiautobiographical story offers historical facts, cultural lessons, and some hilarious moments as readers follow Cindy from sixth to eighth grade.

Fantaskey, Beth. Isabel Feeney, Star Reporter. Houghton Mifflin Harcourt. Historical fiction/Mystery. Gr. 4+. 336 pgs. Good read aloud. Isabel Feeney, a 10-year-old newspaper girl in Chicago circa 1920, aspires to be a crime reporter. When one of her customers is accused of murder, Isabel manages to join the investigation while Miss Giddings languishes on Murderess’ Row. This Prohibition-era tale of gangsters, bullet-proof cars, and the first women crime reporters, is written in short, action-filled chapters.

Hatke, Ben. Mighty Jack. First Second. Graphic Novel. Gr. 4+. 203 pgs. A garden of plants that bite grows in Jack’s back yard when he and his autistic sister, Maddy, trade their mom’s car for a packet of seeds at a flea market. This remake of “Jack and the Beanstalk” ends in a cliff-hanger, with a sequel anticipated. Hatke’s imaginative, threatening plants (and dragon!) keep Jack, Maddy, and a neighbor, Lilly, vigilant.

Hennessey, M.G. The Other Boy. HarperCollins. Realistic fiction. Gr. 4+. 234 pgs. Shane Woods was born a girl but knows he is really a boy. At 12 he wants to begin hormone therapy; his mom is supportive, but his dad opposes it. When someone at school finds an old picture of Shane dressed as a girl, his new identity and his position as pitcher on the school’s baseball team are in jeopardy. Shane’s narration is realistic; his fear when rumors start, palpable. A moving story that ends hopefully.

Korman, Gordon. Slacker. Scholastic. Humorous. Gr. 4+. 230 pgs. Good read aloud. Cameron is a diehard video gamer until his parents insist he find a new interest. He pretends on line to start the Positive Action Group, a service club, to appease them; but, in spite of his efforts, a group actually begins to meet at school and becomes wildly popular! The wacky story of this reluctant leader, told by multiple narrators, is full of laughs and plot twists.

MacHale, D.J. Curse of the Boggin Random House. Fantasy. Gr. 4+. 242 pgs. Marcus is being threatened by a shape-changing ghoul who wants him to “surrender the key” or his family/friends will die. This is the first in a planned series about the Library, a place that exists in another dimension, full of stories of disrupted souls. Marcus’ battles with the Boggin lead him into some very scary situations. What is real? What is imaginary?

Markell, Denis. Click Here to Start: A Novel. Delacorte Press. Mystery. Gr. 4+. 310 pgs. Good read aloud. Ted, an ace at escape-the-room computer games, is willed the contents of his uncle’s apartment, which turns out to be a real-life game with treasure in the offing. Can Ted, his best buddy Caleb, and newin-town Isabel unravel the mystery before a dangerous stranger steals the fortune involved? World War II buffs will enjoy this debut novel about looted Nazi treasure and the Monuments Men.

Marsh, Katherine. The Door By the Staircase. Disney Hyperion. Fantasy. Gr. 4+. 273 pgs. Good read aloud. Fans of Russian folklore’s Baba Yaga will enjoy this tale about Mary, an orphan adopted by Madame Z and her cat. Mary appreciates her new mother and the delicious meals she cooks, until she realizes that Madame Z might be the Russian legend, who lives in a house with chicken feet and eats children! Can Mary escape? A complicated, satisfying story with a brave heroine.

Nesbet, Anne. Cloud and Wallfish. Candlewick. Historical fiction. Gr. 4+. 395 pgs. Noah travels behind the Iron Curtain into East Berlin with his parents who give him a new name and identity and warn him not to talk about serious things because “they” might be listening. He meets Claudia whose parents reportedly died in a car accident. The two lonely children become fast friends and in this touching story of friendship and espionage. Sidebars tell readers about East Germany, the wall, and the Cold War.

Peck, Richard. The Best Man. Dial Books. Realistic fiction. Gr. 4+. 232 pgs. Two weddings frame this story and Archer is in both. He spends time with his role models — his architect grandpa, his carcustomizing dad, and his Uncle Paul. Enter Mr. McLeod, a new and well-liked student teacher who responds to antigay bullying at school by announcing he himself is gay. When he eventually wins the heart of Archer’s Uncle Paul, Archer takes the revelation in stride. A matter-of-fact treatment of same-sex marriage.

Plourde, Lynn. Maxi’s Secrets: (Or What You Can Learn from a Dog). Nancy Paulsen Books. Realistic fiction. Gr. 4+. 262 pgs. Good read aloud. Timminy is very short bully bait, and not happy about moving to Maine to start middle school. His parents agree to get Maxi, a Great Pyrenees puppy, for him as a consolation prize. Between his blind neighbor, Abby, and Maxi, who the family finds out is deaf, Timminy realizes he could rethink his negative attitude.

Reynolds, Jason. Ghost. Atheneum. Sports fiction. Gr. 4+. 181 pgs. Good read aloud. “Ghost” is a seventh grader whose father tried to shoot him and his mother 3 years ago. He is recruited as a sprinter for one of the city’s youth track teams. Ghost is combative and doesn’t always make the best decisions; but, at the same time, he is candid, humorous, and a character worth rooting for. This is the first in a 4- book series; each to focus on a different team member.

Sales, Leila. Once Was a Time. Chronicle Books. Science fiction. Gr. 4+. 324 pgs. While Lottie’s physicist father is researching time travel in London in 1940, the Nazis threaten his daughter, Lottie, and her best friend, Kitty, to coerce him into sharing his information. Instead Lottie jumps through a time-travel portal and finds herself in Wisconsin in 2013. She adjusts to life in the modern world but is determined to find Kitty. A unique story about a loyal and very British heroine..

Sweet, Melissa. Some Writer!: The Story of E.B. White. Houghton Mifflin Harcourt. Biography. Gr. 4+. 161 pgs. This beautifully crafted book brings E.B. White to life with handwritten letters, family photographs, maps, and collages featuring watercolor illustrations. The storyline follows White from his birth through summers in Maine, and from writing for “The New Yorker” to becoming a famous author. Quotes from E.B. himself at various ages pepper the narrative. A wonderful look at this shy, brilliant writer’s life.

Weeks, Sarah. Save Me A Seat. Scholastic. Realistic fiction. Gr. 4+. 216 pgs. Good read aloud. Two outsiders — Joe, with an auditory processing disorder, and Ravi, a new student from India — find common ground during one week in fifth grade at Albert Einstein Elementary. Each boy takes turns, in alternating short chapters, describing run-ins with bully, Dillon, and life in the resource room. A poignant, at times amusing, look at cafeteria/classroom conflicts. 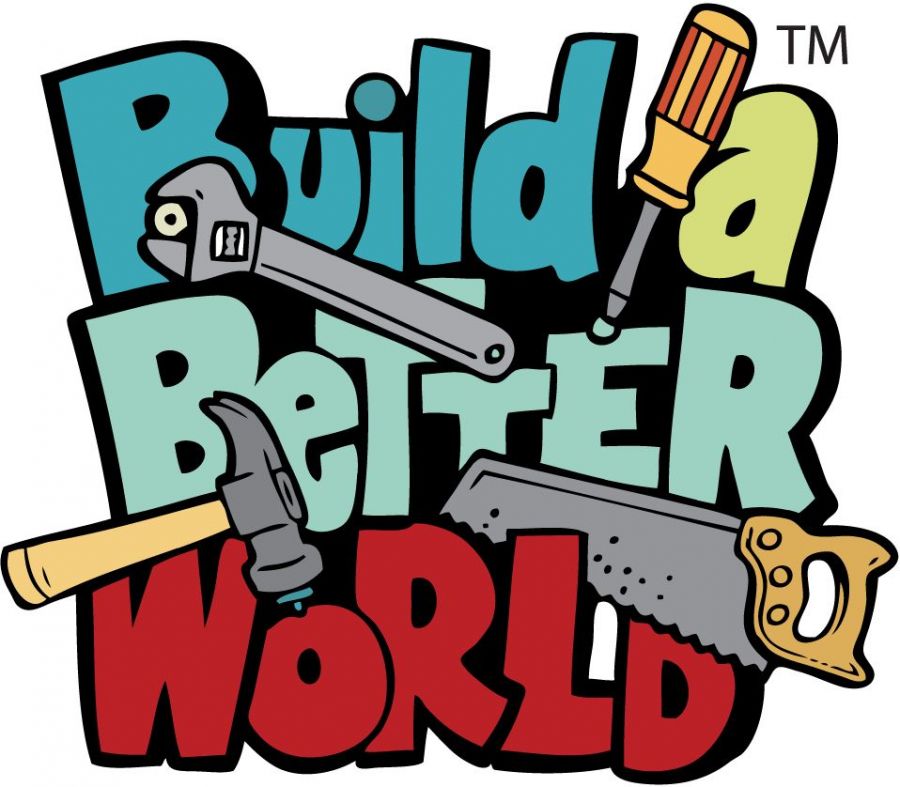 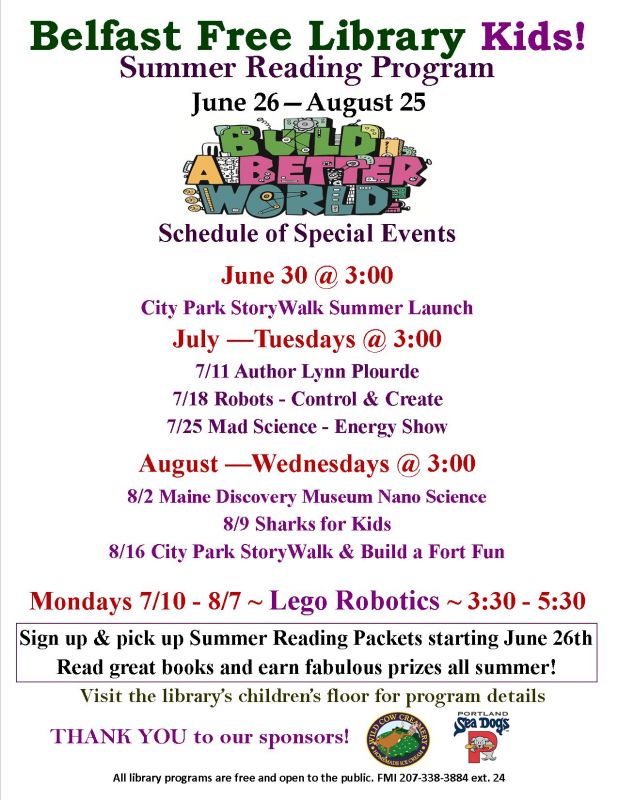 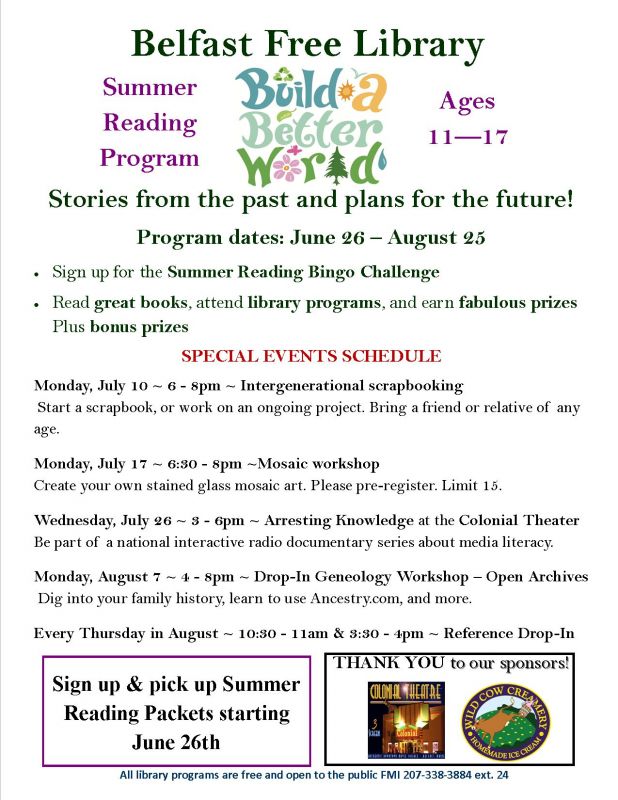 While all programs are suspended and Friday Night Flix is on hold, our film streaming service Kanopy has made available many more credit free viewing films and has created several curated lists for upcoming celebrations.

New to Kanopy? Sign up here with your library card. 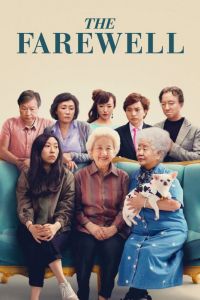 Check out the expanded list of Credit Free Viewing

Visit this Maine State Library page for information and resources important to Maine citizens, and the Health Insurance Marketplace website to compare options and apply for coverage.